Moved to Action: Glaucoma's Impact on a Family 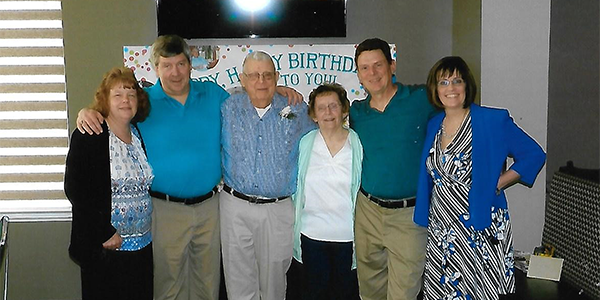 Judy and Wayne Yendall of Buffalo have long known the impact of glaucoma. The disease runs in Judy's family, affecting her grandmother, great-aunt, father and sisters. She was tested at early age and has managed her glaucoma for decades with laser surgery and eye drops.

After their son Rick was diagnosed with pigmentary glaucoma, Wayne was also tested and diagnosed with the same rare form of the disease. Rick was a championship swimmer at Grove City College in Pennsylvania when severe eye pain took him from the school infirmary to hospitals in Pittsburgh and Boston for surgery and treatment. His disease was managed, allowing him a long career as a plastics engineer. Eventually, however, his vision declined to a point where he could no longer read the blueprints at his job. Rick, now blind, uses a special computer to stay in touch with others and is grateful for the support of his family.

Wayne has been fortunate to be able to manage his sight with eye drops, and has had both laser and cataract surgery under the care of a glaucoma specialist. He encourages others to "get your eyes checked and stay on top of your eyesight."

Judy and Wayne recently celebrated their 60th anniversary and are hopeful that scientific progress will help reverse Rick's blindness. They have been inspired by a new National Glaucoma Research project, Using Electric Fields to Regenerate the Optic Nerve, as a possible cure to reverse the damage.

"We are very interested in the research," said Judy. "We donate what we can on limited budget, and what we can give, we give gladly."