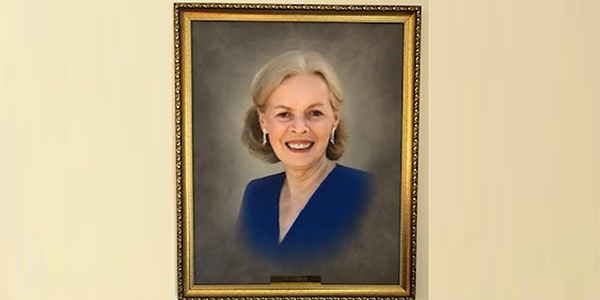 Carol Maude Pearl, lived in Odessa, Delaware for 35 years, was active in community and church activities, and was known as "our queen" and a "hostess with the mostess" by all who knew her.  She opened her home each year for the Christmas in Odessa House Tour, sponsored by the Odessa Women's Club. Carol loved to dance, and her smile would light up any room.

She and David, her husband of 54 years, first met at a faculty party and both taught school for decades. In retirement, they travelled the world. The Pearl clan now includes four children, eight grandchildren and four great grandchildren.

Dave is a member of the Heritage Society because of his charitable gift annuity.

Carol first experienced mild signs of dementia in 2012, and the disease progressed slowly at first. David became aware of Alzheimer's Disease Research (ADR), a BrightFocus program, when he attended a local session on dementia. The speaker discussed research for treatments and a cure, and that is when he began supporting the ADR program.

"I am so happy that Alzheimer's research is going on, and that there are little green shoots of progress," said David. "My hope is that with enough resources, eventually scientists will be able to come up with prevention for this horrible disease."

For David, supporting research was, "the only answer so the next family would not have to suffer like we did."

Carol passed away in July 2019.  Her family held a celebration of her life, and David and their children light candles in her memory. David is arranging a tree memorial for Carol at BrightFocus.